"Suffering the Slings and Arrows of Outrageous Fortune"

Barbarians at the Gate

As a student of history, I tend to view everything from the lens of the past; even Ehlers Danlos Syndrome at times. EDS is a formidable enemy – a pillaging barbarian of historic proportions. Much of human history involves seeing the barbarians heading for the gate and the populace girding itself for war. Our fight with EDS is no different…

For more than 3 years, my family has been under siege by EDS and its ugly band of cohorts. Our situation is not much different from being in a walled Roman city or a medieval castle, surrounded on all sides by the enemy – the only option is to dig in, figure out who you are fighting and just try to survive.

Unbeknownst to us, the barbarians had been quietly encircling us for years, but the first alarm came in September of 2009 when Em had her first major dislocation. Confused by the sudden attack, we could not identify the well hidden enemy – who the heck was holding us hostage? By the time we identified the invaders [for our purposes we’ll call the EDS army the “Vandals“, one of the barbarian groups that attacked Rome (appropriate, don’t you think?)], they were well entrenched and we knew we were in for the long haul. The weapons of this enemy were hypermobility, dislocations, joint pain, and fatigue – and, in conjunction with its equally nasty allies, generally stealing away everything of importance. Here is what we were up against:

Then, we found the Vandals had invited their buddies the “Goths” (aka Dysautonomia) to the party, who brought their own special weapons: tachycardia, syncope, fatigue and rapid disability. It looked something like this:

The Goths in action

Following close behind the Goths were the Mongols, with their debilitating combo of neurological symptoms. These guys were bad, BAD news. I am fairly sure I saw Genghis Khan himself, leading the charge against my kiddo. The leader of the pack, Genghis Khan

Then came the Huns – the thuggish and ill-behaved mast cells pillaging/activating all over the place for no good reason. Little did we know that these were the guys who had stirred everyone else up and would prove to be a wily and evasive foe. Attila the Hun is a total jerk, as you might be able to tell from this image:

The last of the usual suspects were the Vikings, casting a pall across the land with gastroparesis, slow motility and early satiety – using food as a weapon is their MO.

Overwhelming force. Against a kid? Really?

Each of these evil doers brought their own special set of symptoms that interacted with and enhanced the weapons of the other attackers. They were often in cahoots, although each of them were plenty formidable enough on their own – banding together, they can feel unstoppable.

It has taken us many, many months of hard work to make progress against these foes. We were ill prepared in the beginning but had a few tricks up our sleeves – a team of good doctors who have thrown their smarts into the effort, family and friends who have stayed the course with us, our own resourcefulness in figuring out how to get through this crisis and the right medications to combat each of the weapons used against us. The siege has been long and hard and exhausting – there have been moments when we felt like giving up.

But, the thing about a siege is… It eventually ends. It may take years, but it eventually ends and, often in history, the advantage is with the home team. The invading army, if it cannot gain a victory, gives up and heads home. Usually weaker than when it arrived. And, better known to the inhabitants than when it slunk onto the scene undercover of darkness. Moreover, by the end, the townsfolk have been battle hardened and have fortified their defenses. They may be attacked again by the same enemy, but it will likely not be a surprise and they will be ready to fight.

So, if you can just hold out long enough and bear the horrible deprivations a siege brings, the enemy can be beaten back. Perhaps not defeated entirely, but once you know the ways of your enemy, you have a chance to to beat him. I know that sometimes EDS is not beatable – sadly, too many good people have been lost to it. But, every person who fights back and wins weakens the enemy so that fewer are taken. We just have to hold on.

We are hard pressed on every side, but not crushed; perplexed, but not in despair;

persecuted, but not abandoned;struck down, but not destroyed.

Comments on: "Barbarians at the Gate" (3)

Thanks for visiting my blog where I chronicle 'Our Life with Ehlers Danlos Syndrome'. I am sharing my family's journey with EDS (and everything that goes along with it) in the hope that our experiences will help someone else.

Go to Our Story to read about the early days of our EDS journey. Or click here to go to the first post of this blog, if you would like to start at the beginning.

Take a look around - I hope you learn something that is helpful in your own journey! While you are here, I would love it if you left a comment telling me about yourself. Feel free to contact me if you have any suggestions about what you would like to see on this blog! 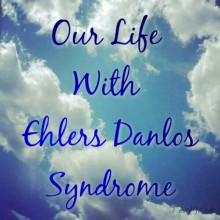 Down The Rabbit Hole

Barbarians at the Gate

Living in the Fireswamp of EDS

The Driscoll Theory and How it Might Help Us

The Driscoll Theory and How it Helped Us

To contact me, you can comment on any post or page - I strive to reply to every comment and it is the easiest way for you to get a response. If you would like to have a private conversation, you can contact me via email through the form below. I try to reply but sometimes (often) get behind in my correspondence :

This work is licensed under a Creative Commons Attribution-NonCommercial-NoDerivs 3.0 United States License.